Proceed to checkout
- or -
Close Menu

Often describe by gem experts as emerald by day and ruby by night, this beautiful and rare stone belongs to the mineral chrysoberyl. Discovered in Russia in the 1830's, this gem is now found in Sri Lanka, East Africa and Brazil. Exceptionally rare and valuable.

Alexandrite is a birthstone for June, along with pearl and moonstone. It is also the gem for 55th wedding anniversary.

It is also a strongly pleochronic gem, which means, it can show different colours, when viewed from different angles. The typical clolurs are green, orange and purple-red. But the striking colour change does not arise from the gem's pleochroism but rather from the mineral's unusual light absorbing properties. Due to its scarcity, especially in larger sizes, alexandrite is a relatively epensive member of the chrysoberyl family. 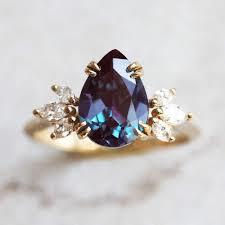 What to love about this stone?

Light Source - this gem provides dramatic proof of how much the light source affects colour in gems.

Phenomena - This stone can show both colour change and a cat's eye; two phenomena in one gem.

What jewellery piece would you have an Alexandrite in?